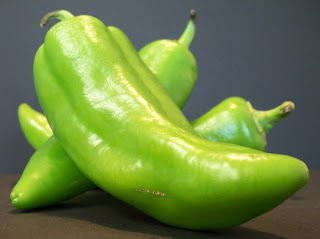 Before our family moved to New Mexico, the only time I cooked with chile peppers was when I was making salsa.  After moving to a state who's motto is red or green (meaning red or green chile sauce), I figured it was probably time to expand my knowledge of the local fare . I quickly came up to speed, and along the way, I learned by trial and error how to handle chile peppers.
Wear gloves when chopping chile peppers.  Not the flimsy kind, but the good old yellow ones.  The thin glove can let the capsaicin (the ingredient in peppers that create the burn) through.  Even the mildest chile pepper can burn your skin.  If you touch your eyes or nose after chopping peppers, it can burn for hours.
The heat in a pepper is contained in the veins which transfers to the seeds.  To help control the heat in your recipes, remove not only the seeds, but also the veins.

When picking a pepper a general rule to keep in mind is that red peppers are hotter than green or yellow peppers.  The hottest peppers have pointed tips and narrow tops.  Round ends indicate mildness.  Of course to every rule there is at least one exception.  One of those being the fiery Habanero pepper.  It has a rounded end and is often green or yellow in color.
The best relief for a burning mouth is sour cream, yogurt or milk.  Don't grab the water or pop in a effort to cool your mouth, both of these beverages tend to move the heat around instead of putting out the fire.