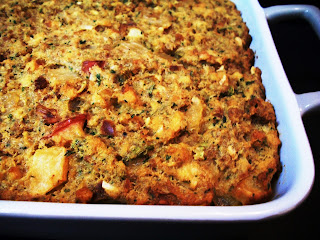 Apple Stuffing
2 medium apples, cored, diced
1/3 cup diced onion
2 tablespoons butter
2 (6 ounce) boxes stuffing mix, prepared according to package directions
3 eggs, slightly beaten
Preheat oven to 375 degrees.  In large skillet, saute apple and onion in butter over medium heat until tender.  In large bowl, combine prepared stuffing, apple mixture, and eggs. Mix well.  Pour into greased 13x9 inch baking dish. bake 30 minutes or until golden brown. Makes 8 to 10 servings.
This recipe is a recreation of one I saw on Rachel Ray's show a few years ago.  It was one of her Thanksgiving specials, in which she makes the whole meal in 60 minutes.  I loved her idea of putting apples in the stuffing, but she used a lot of ingredients when she made the stuffing and I only like to use a few ingredients when I cook.  After a couple of experiments, I came up with the above recipe.  Rachel put her stuffing in the cups of a muffin pan.  When I tested this recipe on my husband and son that is the way I made it too.  We like the crunchy brown parts of stuffing and by baking it in the muffin pan each serving is nice and crunchy on the outside and moist on the inside. 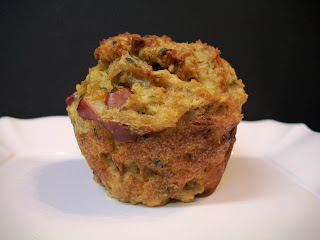 The stuffing is savory, with just a hint of the apple sweetness.  I don't like dry stuffing, and by adding the apple that problem is avoided.  My son Tyler, was never a fan of stuffing until I created this recipe, now he loves it!  I am sure it is the addition of the apple that he likes more than the stuffing.

Tyler was allergic to apples when he was a little boy.  When he was five, we attended a Fall Harvest party at our church.  All of the kids were given a bag full of candy with an apple thrown in to make the adults feel better about the sugar overload.  When I realized there was an apple in the bag, I began looking for my son to make sure he didn't eat the apple.  I found him hiding in a corner, munching on the apple as quickly as he could.  I took the apple away from him and told him to eat the candy.  As I turned to throw the apple away, I caught  another mom looking at me in horror, for encouraging my son to eat candy instead of the nutritious apple.  I explained to her, that in a few minutes he would begin to get sick from eating the apple.  I couldn't have her thinking I was a bad mother or a candy pusher now could I. 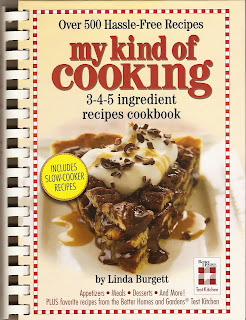 Is Jennifurala of Indigo's Sugar Spectrum


Sign up as a follower, to enter my monthly, Cookbook Giveaways!
Check back on Tuesday, for  details on December's giveaway..
For more great giveaways, visit my friends blogs!
Bo, at Bo's Bowl, is giving a way a, Barefoot Contessa Cookbook!   You will love his blog!  Not only does he have great giveaways,  his recipes are incredible!  One visit to his blog and you will see why I faithfully follow it.
Also visit my friend Pam's blog, Pam's Midwest Kitchen Korner, she is giving away a, John Besh Cookbook.  You will love Pam's delicious recipes!  Once you read her blog, she will be your friend too!